Last week I wrote about the All the Beers I Drank in Belgium. Yes, Belgian beers are an important part of the country’s culture (at least in my eyes); but how about the rest of the cuisine in Belgium?

Belgium is a tiny Western European country that doesn’t always make it into people’s general travel itineraries when visiting Europe, but in many ways, travellers to Europe who miss Belgium, are missing out on a lot. And cuisine, with my big love for anything edible, is a big part of this!

Despite Belgium being such a small country, Belgian cuisine is incredibly varied. Before my visit in August 2013, all I could have ever attributed to Belgium is beer, chocolate, and waffles… but there are many more dishes to try, so make sure you make your way to Belgium and stuff your face with all the delicious meals!

Chocolate
Belgium is known worldwide for the quality of its chocolates. What sets Belgian chocolates apart from any others, is that they use the oil from the cacao itself to create their chocolate bars, as opposed to using external fats, as many countries do. What this does, is create a chocolate that is stronger and creamier in flavour, as it is not diluted by an animal or vegetal lard which will reduce the cacao flavour.

But Belgians don’t stop at just eating chocolate as bars. There are products like the Kwatta chocolate spread, a spread similar to Nutella, but is pure chocolate (no Hazelnuts) and comes in either milk or dark chocolate versions. Belgians often eat this spread for breakfast, as well as simple chocolate sprikles over buttered bread, and chocolate milk… this might not be the healthiest way to start the day, but it sure is delicious!

Belgian Breakfast
Traditional Belgian breakfasts are very continental European: a collection of breads (often fancy), cheeses (often stinky), and meats (often pork, although at times horse). On the weekend I spent in Belgium, my friend Timothy set up a nice array of foods for a proper Belgian breakfast, including fresh breads (mostly fancy), meat cuts (including smoked horse), cheeses (some stinky), and assorted spreads like fruit preserves and Kwatta chocolate spread. 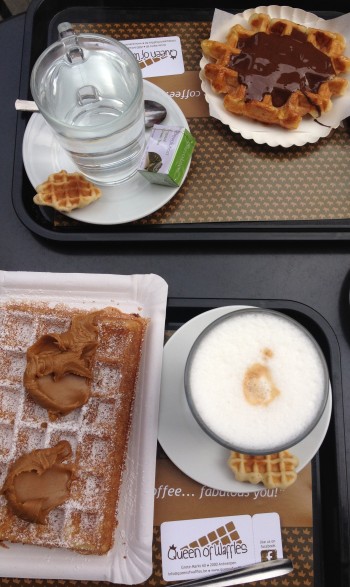 Waffles
Another big internationally known staple for Belgian cuisine are waffles, and interestingly enough, waffles are not a breakfast meal (as they are often seen in other countries) but an any-time-of-day snack.

During my visit to Antwerp in August 2013, my friend Timothy took me to the Queen of Waffles, a local LGBT-friendly waffle café that serves a wide variety of waffle styles, topped with a range of yummies. Timothy went for the basic Kwatta chocolate spread while I tried something different: a creamy spread made from the Belgian Speculoos biscuits, which are similar to gingersnaps.

The Queen of Waffles is located in the centre of Antwerp just off of the Grote Markt.

Frites
Frites (or fries, for us non-Belgians – “chips” in the UK) are super common in Belgium; in fact, it is believed that the dish originated there (not in France, as the North American full name “french fries” alludes).

The thick-cut fries are often served accompanying other dishes (even food that in other countries is considered to be higher-class, such as mussels or rabbit!), but can also be bought on their own as a snack. If you go to a frites take-out stand, the frites will usually be served along with a delicious thick mayonnaise to dip them in: the Belgian way. 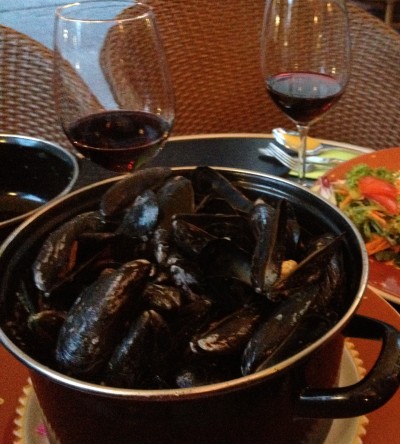 Mussels
A nice pot of mussels is a typical Belgian dish, and in fact Moules-frites (mussels & fries) is the official National dish of Belgium.

During my visit to Belgium, Timothy and I went to a restaurant where I got a delicious serving of moules-frites cooked in a white-wine sauce.

There are many variations on mussel recipes, from cream-based to tomato-based to broth-based (usually with either red or white wine in any of them), but you’ll be sure to find mussels in many establishments in Belgium, especially those serving traditional food.

Gentse Waterzooi
My friend and host Timothy was kind enough to cook for me on many occasions during my stay in Belgium. The first time he cooked, he made a traditional Gentse Waterzooi, which is basically a tasty chicken broth, full of hearty chopped vegetables, chicken breasts, and meatballs (variations on the contents can be made, but this is the one he made).

The waterzooi is served as a soup with a big dollop of sour cream on top, similar to a Russian borscht, although some recipes seem to include the cream during the cooking process. 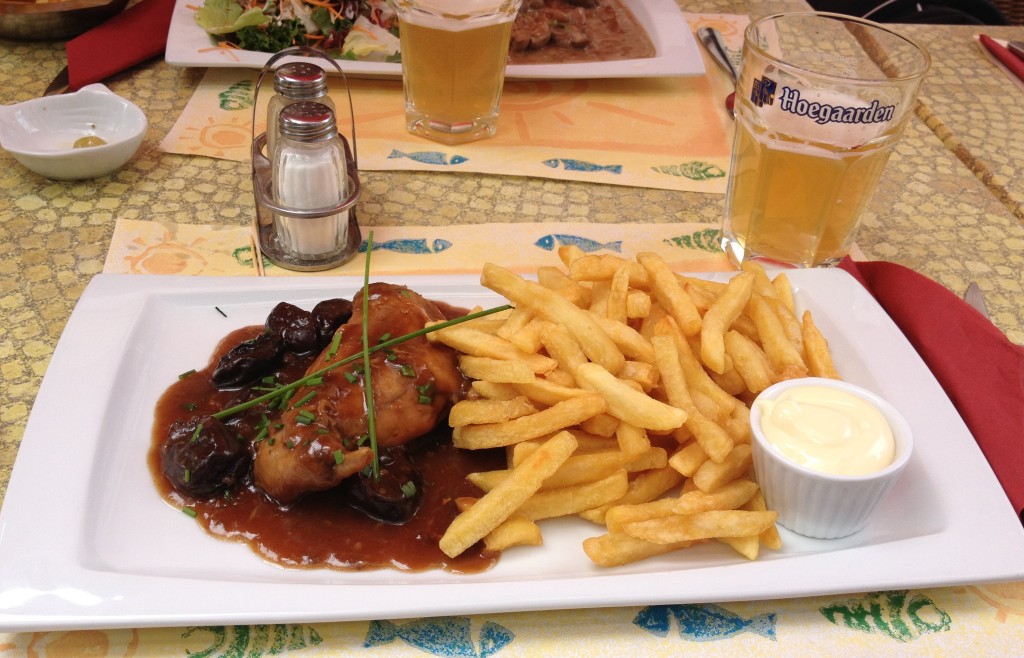 Lapin Aux Pruneaux
On our day trip to Brussels, we went to a nice restaurant and I tried the French-cuisine Lapin Aux Pruneaux (Rabbit and Prunes) dish: a juicy chunk of rabbit with prunes, smothered in a beautiful thick beer and prune sauce. The dish is traditional to the French half of Brussels. 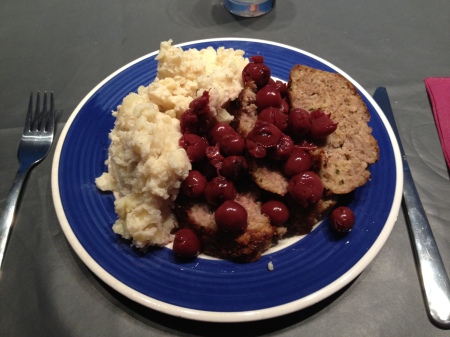 Meatloaf with Sour Cherries
Again at his home, Timothy cooked for me another traditional Belgian dish: a nice hearty meatloaf served with cooked red sour cherries.

This is a beautiful dish, combining the heartiness of meatloaf and the boldness of tart black cherries, and is often served along with either mashed potatoes or frites.

Dame Blanche
A delicious, although incredibly basic desert, the Dame Blanche (White Lady, in English) is vanilla ice cream covered with thick melted chocolate. Nothing out of this world, but a nice Belgian dessert to finish off a meal.

Belgian Beers
Belgium has over 180 breweries and an it is estimated they have over 800 unique beers, so beer definitely forms part of the country’s cuisine. During my five-day visit I got to try 20 different beers, and I can attest, Belgian beer is good!

Based on the small size of Belgium, I was surprised at the range in its cuisine, and seriously recommend everyone take a trip to this country and check out the incredible fusion and variety in flavours.

Have you ever been to Belgium? What is your favourite dish?!

One of my favourite memories in New Zealand was this action-packed day. Started the morning on a 4x4 trek through Arrow River and to the breathtaking Skipper’s Canyon, followed by an afternoon jet boating ride on the Dart River, Te Awa Wakatipu - Mount Aspiring National Park. . . . #kiaoraflighties #nomadsafaris #queenstown #skipperscanyon #dartriver #teawawakatipu #mtaspiringnationalpark #jetboat #4x4 #goldenhills
A stop along one of New Zealand’s most beautiful drives, the road from Queenstown to Glenorchy, with beautiful views along Lake Wakatipu 💙 . . . #NewZealand #kiaoraflighties #Glenorchy #Queenstown #LakeWakatipu #nature #travel #NZ #100purenewzealand #purenewzealand #nomadsafaris #wakatipu
Beautiful Queenstown, just as impressive now as when I first met her 9 years ago! Also a packed itinerary full of adventures with wine tasting at three Central Otago wineries, a ride up the Skyline Gondola, lugging, zip trekking, jet boating in the lake, a burger at the famous Fergburger... endless opportunities for fun! . . . #kiaoraflighties #Queenstown #NewZealand #travel #100purenewzealand #beunbordered #wewilltravelagain #gaytravel #wearetravelgays #skylinequeenstown #purenewzealand
Living my best castle life at Larnach Castle, just outside of Dunedin, New Zealand. The views from the castle and its surroundings are also incredible! . . . #kiaoraflighties #Dunedin #travel #NewZealand #castle #larnachcastle
Sailing the Auckland harbour, before the world fell apart. Might be the last trip in a while - so happy it was such a good one! . . . #kiaoraflighties #Auckland #NewZealand #travel #urban #skyline #AKL #beunbordered
Leap Day 2020 surprised us with some unexpected sun, so I went for an 8km hike in one of my favourite spots: Lynn Canyon Park and Rice Lake (North Vancouver). . . . #NorthVancouver #NorthVan #NorthShore #LynnCanyon #RiceLake #lynnvalley #hiker #gayhiker #vancouverhikes #vancouvertrails #vancouver #explorebc #beautifulbritishcolumbia
Having a gay old time at the Beef Dip party in Puerto Vallarta during Bear Week. I usually don’t like my smile in pictures, but this photo captured perfectly the way @eamumc makes me feel a lot of the time ♥️ 📷: @lycos.mp . . . #travel #gaytravel #PuertoVallarta #pvr #beefdip2020 #beefdip #bearadise #bearweek #boyfriends #gaybeard #gaycub #scruff #menwithbeards #gayfiance #lgbt #lgbtq #mantamar #queer #beard #mexico #gayvallarta #gaymexico #gayboyfriends #husbear #wearetravelgays
Even the sky dresses in pink for sunset at Playa Los Muertos. Did you know?: Puerto Vallarta is Mexico’s most LGBTQ-friendly city, and a staggering 34% of all tourists visiting PV identify as LGBTQ. Playa Los Muertos, on the edge of the Romantic Zone, is Puerto Vallarta’s official gay beach, lined with multiple queer beach clubs and even two queer hotels. The Romantic Zone is also full of gay and gay-friendly nightclubs, restaurants, cafes and shops, and hosts queer events throughout the year... but don’t worry if you’re hetero, straights are welcome too - just don’t forget to be respectful of others. . . . #gaypv #gayvallarta #puertovallarta #mexico #exploremexico #travel #gaytravel #beach #sunset #playalosmuertos #gaybeach #lgbtq #lgbt #queer #beefdip2020 #gaymexico #lgbtqia
And so, another wonderful week in Puerto Vallarta comes to an end. Only had clear blue skies at the very end, but we had a great time even when it was cloudy and raining at the Beef Dip / Bear Week parties, enjoyed lots of great food, hung out with friends and met some lovely new people! . . . #PuertoVallarta #Mexico #travel #gaytravel #queer #boyfriends #beardedmen #scruff #beefdip2020 #travelmexico #gayPuertoVallarta #bearweek #bearsofinstagram #bearadise #losmuertos #playalosmuertos #gaybeach #wearetravelgays #gayvallarta